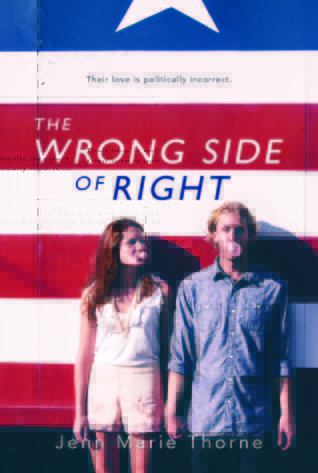 Kate Quinn’s mom died last year, leaving Kate parentless and reeling. So when the unexpected shows up in her living room, Kate must confront another reality she never thought possible—or thought of at all. Kate does have a father. He’s a powerful politician. And he’s running for U.S. President. Suddenly, Kate’s moving in with a family she never knew she had, joining a campaign in support of a man she hardly knows, and falling for a rebellious boy who may not have the purest motives. This is Kate’s new life. But who is Kate? When what she truly believes flies in the face of the campaign’s talking points, she must decide. Does she turn to the family she barely knows, the boy she knows but doesn’t necessarily trust, or face a third, even scarier option?

Set against a backdrop of politics, family, and first love, this is a story of personal responsibility, complicated romance, and trying to discover who you are even as everyone tells you who you should be.

In her debut, Jenn Marie Thorne creates a compelling story about family and identity that is simultaneously simple and complex. It restored my hope that contemporary can be thoughtful and fun. (Full disclosure: I avoided contemporary for the past two years so I haven’t read other contemporary books that also fit this criteria.)

Kate is an ordinary girl thrust into the limelight by a New York Times article revealing she is Mark Cooper’s love child. Now, this would not have been as big of a deal of it if Mark Cooper was not running for President. Naturally, Kate is invited to visit her father’s family– now hers– for the weekend while his father’s team figures out how to spin this media frenzy. She simultaneously deals with conforming to the campaign’s image of her, fitting in with her new family, and falling in love.

One of the aspects I loved most about this book was how ordinary Kate was. It is soooo refreshing to not see a special snowflake main character. Kate does not– most of the time– pretend to be someone she is not. When she does pretend, it is in alignment with her characterization. How many of us can relate to wanting to please our parents, to belong, to feel loved? Come on, raise your hands! This describes most of us.

Kate can be criticized for not speaking up for herself enough, but let’s not pretend most of us would not follow in her footsteps. She just gained a family! Of course she wants them to like her. Speaking of family, I adore how Jenn Marie Thorne crafted their relationship. There was realistic tension between Kate and all her new family members, yet, they never villanized each other.

Another of my other favorite aspects is her relationship with Andy. He is everything that Kate isn’t: rebellious, politically savvy, blunt, and spontaneous. They bring out a unique side of each other. I don’t want to say anything more about this because it would be spoilery, but trust me, this relationship is A+!

It’s important to acknowledge that given the context the book was written in– about a year before the 2016 U.S. election– this book took guts, both on the part of the author and publishing house. This book does not shy from discussing political topics. It addresses abortion, gay relationships, and immigration. As her father’s campaign progresses, Kate finds herself questioning what she believes in and not all of it aligns with her father’s views. In fact, one of these becomes a big conflict between Kate and her father. Regardless of your party affiliation or lack thereof, it’s possible to read this book without cringing.

Truthfully, I didn’t expect to like this book as much as I did. I thought it would be a simple light-hearted read; it was definitely much more! The Wrong Side of Right is, at its heart, a story about family, belonging, loyalty, friendship, and finding one’s voice.

2 thoughts on “Review: The Wrong Side of Right by Jenn Marie Thorne”