Ink in the Blood has been on my radar ever since I discovered the title at Yallwest 2019. It contained all the things that made my dark heart happy: religion, theatre, grey morality, complex characters, symbolism, plus a dark aesthetic. It superseded my expectations and I eagerly await the sequel in this duology!

Thank you for Fantastic Flying Book Club for allowing me to be a part of this blog tour! Check out my review, some of my favorite quotes, (and more surprises) for Ink in the Blood.

I received an ARC from Yallwest 2019 in exchange for an honest review.

A lush, dark YA fantasy debut that weaves together tattoo magic, faith, and eccentric theater in a world where lies are currency and ink is a weapon, perfect for fans of Leigh Bardugo and Kendare Blake.

Celia Sand and her best friend, Anya Burtoni, are inklings for the esteemed religion of Profeta. Using magic, they tattoo followers with beautiful images that represent the Divine’s will and guide the actions of the recipients. It’s considered a noble calling, but ten years into their servitude Celia and Anya know the truth: Profeta is built on lies, the tattooed orders strip away freedom, and the revered temple is actually a brutal, torturous prison.

Their opportunity to escape arrives with the Rabble Mob, a traveling theater troupe. Using their inkling abilities for performance instead of propaganda, Celia and Anya are content for the first time . . . until they realize who followed them. The Divine they never believed in is very real, very angry, and determined to use Celia, Anya, and the Rabble Mob’s now-infamous stage to spread her deceitful influence even further.

To protect their new family from the wrath of a malicious deity and the zealots who work in her name, Celia and Anya must unmask the biggest lie of all—Profeta itself.

Ink in the Blood is a complex and unique exploration of faith, morality, and freedom. It follows Celia and Anya, two sixteen-year-old inkling in the service of the Profeta who seeks to escape the insidious religious institution she serves by joining a traveling theatre group. Yet in doing so, she finds herself in the hands of those she sought to escape from.

In Illinia, religion dominates society. It influences people’s way of life from those who are chosen to serve, to those Touched (with insanity) to those deemed in need of guidance. Those who are not in some way directly affected by the Divine wish they were and try to live their life to be more worthy of her. It was awe-inspiring, albeit a little unsettling, to see how deep seated the religious beliefs were and how far people were willing to go for them. (Others to oppose those same beliefs.) Smejkal took it one step further by letting the reader experience what it’s like when that religion begins to change and how its believers adapt to it– or not.

The magic system fascinated me in how even with an explanation of how it worked, there was still something otherworldly about it. Imagine waking up with a tattoo you don’t remember getting and it’s telling you to do something that’s the opposite of what you wanted. I would freak! I loved seeing how Celia and Anya could create art that simultaneously reflected the Divine’s intended message while being up to interpretation. It highlighted the concept of freedom and choice in a world where it doesn’t seem that they have one; especially seeing as Celia and Anya didn’t have a say in being inklings. It goes to show that even the littlest bit of resistance makes a difference. It matters.

I also appreciated that Celia and Anya’s escape from the church allowed me to see some more of their world, particularly the Commedia performances. While I’ve never been to a show or a circus, I do love theatre. I easily fell in love with the Rabble Mob, their mysterious plague doctor, wholesome found family, and unique twists on the tales of Profeta. It is nothing like you have seen before. It was less whimsical and more political. Even as we get to know the troupe, they seem to carry as many secrets and magic of their own as Celia and Anya do.

When I began reading, I wasn’t aware of the heavy LBTQIA+ representation. Ink in the Blood features a variety of identities: nonbinary, bisexual, lesbian, and gay. I cannot express how happy it made me to not only see this representation but to see it included into the world-building as the norm. Smejkal touched on gender identity with the idea of “tenors” or auras that more or less explain people’s pronouns are. I was even more excited to see that the MC mentioned that pronouns were malleable and that it was possible to even feel like two (e.g. she/they) identify who they are.

I felt disoriented when I first started reading since there were a lot of new concepts (and some Latin). Once I pushed though, I found myself admiring the world-building and the imagery with which it was described. Ink in the Blood is a book that both deserves to be devoured while savored. You won’t want to stop reading but stopping to reflect from time to time helped me tie the strings together and understand the discoveries the characters made. By the time you finish, you will find that it all weaves together into an even more complex web of lies and deception than even Celia and Anya imagined.

Ink in the Blood is the story of two girls seeking to create their own destiny in a society ruled by a thousand-year-old-religion that they do not believe. Until they do. Not only does Ink in the Blood manage to do all this, but it does it woven together with beautifully poetic and well-crafted sentences. I hope you will fall under the spell of this outstanding debut as I was. 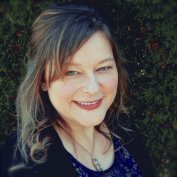 Kim Smejkal lives with her family on muse-satiating Vancouver Island, which means she’s often lost in the woods or wandering a beach. She writes dark fantasy for young adults and not-so-young adults, always with a touch of magic. Her debut novel, INK IN THE BLOOD, will release from HMH in early 2020, with a sequel to follow in 2021. She is represented by Daniel Lazar of Writers House.

Click here to enter to win 1 of 2 finished copies of Ink in the Blood by Kim Smejkal and temporary tattoos. Open only to U.S. residents. This giveaway starts February 5 and ends February 19.

Wait, there’s more! For this blog tour, The Fantastic Flying Book Club is also hosting an giveaway on instagram! Check out my post below for more details!

***GIVEAWAY*** . . . What's your most anticipated of 2020? . . . Ink in the Blood by @kimsmejkal easily became one of my top five– if not THE top– books of 2020. It has art, theatre, trickery, tattoo magic, questions of faith, and a goddess hell-bent on revenge. Plus, that cover? What's not to love? 5/5 stars Ink in the Blood is the story of Celia, an inkling in the service of the Profeta who seeks to escape the insidious religious institution she serves by joining a traveling theatre group. Yet in doing so, she finds herself in the hands of those she sought to escape from. Check out my full review by visiting my blog (link in bio)! Thank you to @theffbc for letting me be a part of this tour! Check out the complete schedule at http://fantasticflyingbookclub.blogspot.com/2019/12/tour-schedule-ink-in-blood-ink-in-blood.html. @tffbc @whatmakespatri teamed up with @hmhteen to host an INSTAGRAM EXCLUSIVE GIVEAWAY for this blog tour! We are giving away 1 copy of INK IN THE BLOOD by Kim Smejkal and temporary tattoos (US Only). The giveaway will start on FEBRUARY 5th 2020 and will finish on FEBRUARY 19th 2020 (00:00 GMT+1). ​ Entries for the giveaway: ▪︎Follow @theffbc & @whatmakespatri ▪︎Follow the author @kimsmejkal ▪︎Follow the publishing house @hmhteen ▪︎Follow my account ▪︎Comment your most anticipated for 2020 and tag @theffbc Extra entries: ▪︎Tag a friend (each friend will be an extra entry). ▪︎Share on your stories about the giveaway (remember to tag me @whatmakespatri and @theffbc) ▪︎Follow @michellesulk & @artsyreadergirl ▪︎Follow any other FFBC team member participating in the tour (let us know on the comment section who did you follow). Check everyone's Instagram handles below!